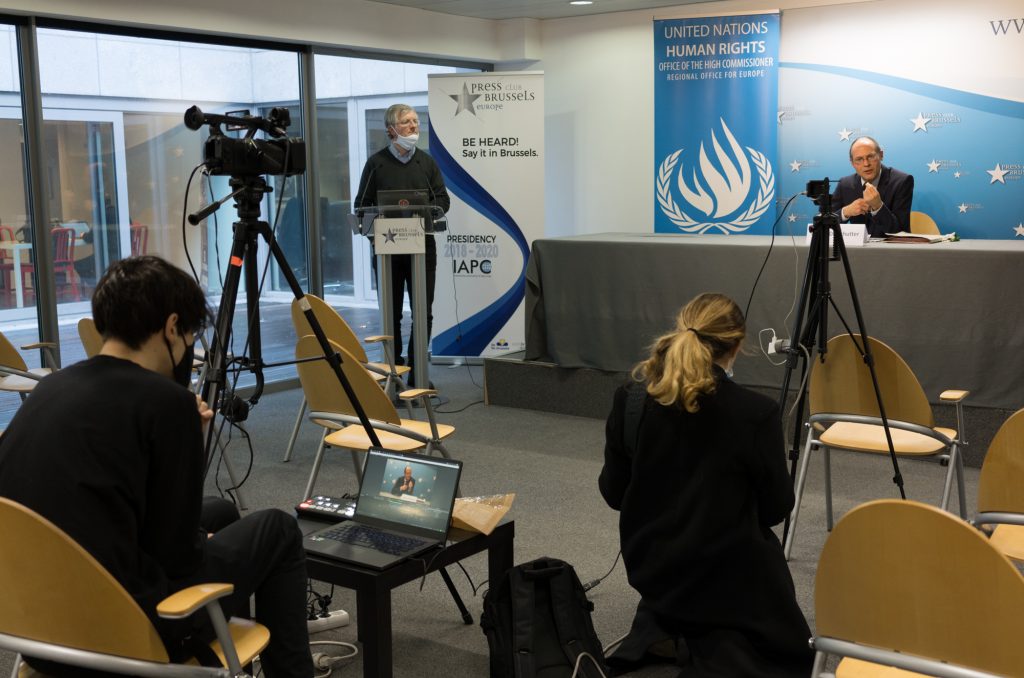 The European Union must boldly rethink its socio-economic governance if it is to live up to its commitment to eradicate poverty, the UN Special Rapporteur on extreme poverty and human rights said at the end of an official visit to the EU’s institutions on Friday.

Watch the press conference on line

“While the EU has made recent progress in the eradication of poverty, it should not fall into complacency,” said Olivier De Schutter. “Its own commitment to lift 20 million people out of poverty by 2020 was largely missed. Since the EU has experienced steady economic and employment growth until very recently, the only explanation for this failure is that the benefits have not been evenly distributed. This is a defeat for social rights.”

The crisis triggered by the COVID-19 has affected many Europeans who had never experienced poverty before. “I have spoken with people who have experienced hunger for the first time, who have been exposed because they are homeless, and who are maltreated and abused because of poverty,” said De Schutter.

“The EU can play an important role in galvanizing Member States’ anti-poverty efforts, notably through the yearly recommendations it issues to its Member States. But instead of prioritizing investments in healthcare, education, and social protection, these recommendations have often imposed budgetary cuts in the name of cost-efficiency. Since 2009, Member States have only decreased their investments in these areas critical for poverty reduction,” the UN expert noted.

The European Green Deal was presented at the end of 2019 by President von der Leyen as the new EU growth strategy. “The fight against poverty is the missing piece of this Green Deal. The Green Deal is supposed to combine environmental and social objectives, but as long as this good intention is not translated into concrete actions, millions will continue to struggle for a decent standard of living in a society that leaves them behind.”

De Schutter also highlighted that the inability of the EU to address the “race to the bottom” of Member States in the fields of taxation and worker protections undermines its anti-poverty efforts.

“Member States compete with each other in very unhelpful ways. They race to the bottom by lowering taxes, wages, and worker protections because they think that’s how they can attract investors and improve external cost competitiveness. But undermining social rights not only violates international obligations, it is bad for enterprises, workers, and public coffers alike. Between €160-190 billion are lost each year from tax competition alone. This results in shifting the tax burden from large corporations and wealthy individuals onto workers and consumers.”

“I was impressed by the dedication of the officials with whom I met,” De Schutter said. “But goodwill is not enough. If Europe wants to lead the way towards inclusive societies, it needs a bold EU-wide anti-poverty strategy that commits to reducing poverty by 50 percent equally across Member States by 2030.

“The current crisis is the chance for Europe to reinvent itself by placing social justice at its core. The presentation of the Action Plan to implement the European Pillar of Social Rights, which should include the Child Guarantee and a proposal to ensure adequate minimum incomes schemes are available across the EU, is an opportunity that should not be wasted.”

The final report from the expert’s visit will be presented to the UN Human Rights Council in Geneva in June 2021.

The end-of-mission statement is here.