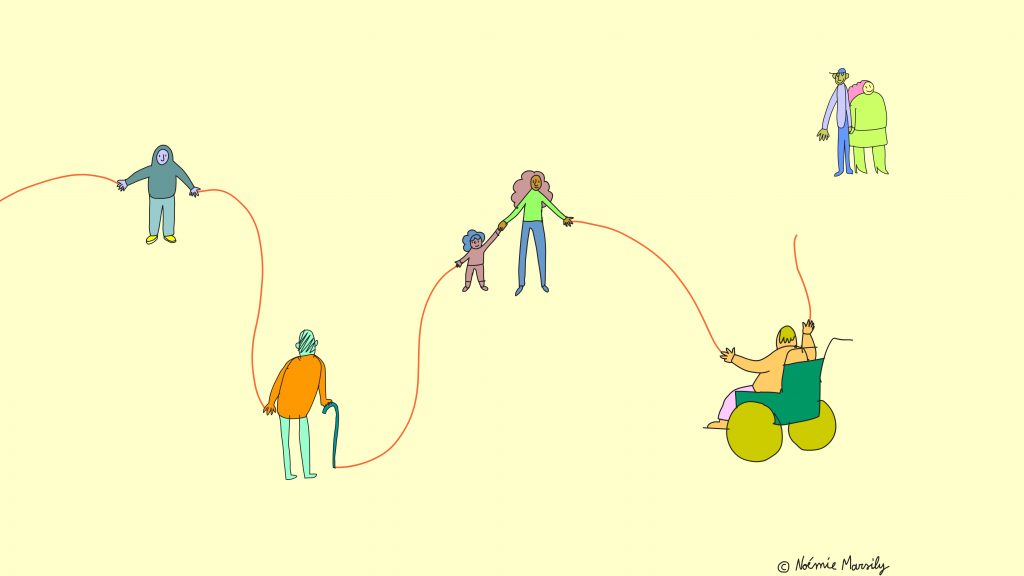 ‘Poor children are deprived of their childhoods,’ said a woman from a marginalised neighbourhood in the Democratic Republic of the Congo, in a dialogue organised by ATD Fourth World. ‘We become adults too early,’ said another woman, from Luxembourg. In low-income households, children start to work early and they often assume heavy responsibilities at an age when days should be about learning, playing and dreaming.

Children born into disadvantaged families are most likely to live in poverty when they grow up. A study in the United States found that children who experienced poverty at any point during childhood were more than three times as likely to be poor at age 30 than those who had never been poor. The longer a child lived in poverty, the study found, the greater the risk of being poor in adulthood.

If the persistence of poverty is significantly entrenched in rich countries, it is even more alarming in the developing world. A study by the Organisation for Economic Co-operation and Development shows that in Nordic countries it would take at least four generations for those born in low-income households to reach the mean income in their society; yet in emerging countries, such as Brazil, Colombia or South Africa, this would take up to nine or even more generations.

Poverty has profound effects on babies—on their health, their emotional development and their chances of access to higher education. Public-health specialists warn that adults with an early experience of poverty during childhood are at greater risk of developing hypertension or chronic inflammation, due to the stress experienced by their family.

In England, the difference in life expectancy between the richest and the poorest deciles of children born between 2014 and 2016 is 9.3 years for males and 7.3 for females. Between 2003 and 2018, one in three premature deaths were attributable to neighbourhood deprivation: if everyone had the same risk of mortality as those on high incomes, almost 900,000 premature deaths in England would have been prevented.

And children are disproportionately affected by poverty: they are twice as likely as adults to be living in extreme and multidimensional poverty. Before the pandemic, the United Nations Development Programme estimated that half of all those living in poverty in low- and middle-income countries were younger than 18. Another study reported that an average of one in seven children in the OECD countries lived in income-poor families and that their numbers had been increasing, highlighting growing inequalities.

Moreover, the pandemic has exacerbated the problem. UNICEF, the UN children’s fund, and Save the Children estimate that 1.2 billion children worldwide are now multidimensionally poor, deprived in critical areas such as nutrition, health, housing and education—a 15 per cent increase since the onset of the Covid-19 crisis. In a relatively wealthy country such as the United Kingdom, a third of children now live below the poverty line—defined as being in a household earning less than 60 per cent of median income.

Societies do not have to treat the younger generation this way. People in poverty themselves propose many solutions, from child healthcare to parental support. During a dialogue on the persistence of poverty, a woman from Bolivia said:

I think it would be good to create centres—run by the state, for example—where children would be welcomed. There are no places to bring our children, only paid day care centres with limited opening hours. We leave in the morning and we come back at night. Sometimes, we work 24 hours a day.

Affordable and easily accessible childcare also significantly raises women’s employment prospects, and thus the ability of households to improve their standard of living—and, in turn, to commit to education. Maternity benefits lead to more time being spent with newborn children, leading to a 3 per cent decrease in their high-school dropout rates and a 5 per cent increase in wages by age 30.

It is possible to help children escape the cycle of poverty, while keeping them within their own family. Even if the stress of poverty on the household may have severe impacts on the child, including on brain development, these are not inevitable and can be reversed: paediatricians have shown that programmes supporting parental engagement and relational health can effectively buffer the chronic stress of poverty.

Investing in early childhood is not only a caring way to welcome babies to the world. It also strengthens society while, as noted by the health economist Martin Knapp, reducing the need for costly downstream social spending. Having followed birth cohorts in the UK from 1946, 1958 and 1970, he saw that the damage done by not treating mental ill-health persisted throughout life: ‘Programmes like anti-bullying schemes in schools pay for themselves 120 times over.’

The economist James Heckman however stresses the early:

Starting at age three or four is too little too late, as it fails to recognise that skills beget skills in a complementary and dynamic way. Efforts should focus on the first years for the greatest efficiency and effectiveness. The best investment is in quality early childhood development from birth to five for disadvantaged children and their families.

His tireless efforts to demonstrate the returns on investment in early childhood education and care were rewarded with a Nobel prize.

For organisations combating poverty, this implies a radical change in mindset. ‘Society should allow children to develop their capacities and allow people in poverty to give the best of themselves. For this to happen, we need society to change its way of perceiving people in poverty,’ said a woman from Guatemala during the ATD Fourth World dialogue.

Supporting children at a very early age has benefits at many levels: it creates a stronger society, with better education, better health and more widely shared prosperity. If we are serious about breaking the cycle of poverty, we should start with investing in children.